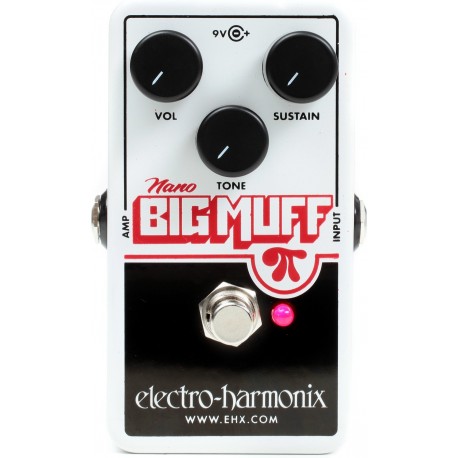 Everything you love about the legendary Big Muff, in a compact pedal that's perfect for any pedalboard!

Legendary Electro-Harmonix for most people hardly needs an introduction. The New Yorker company with crazy ingenious inventor Mike Matthews has been leading the pedal evolution since 1968. With a myriad of style-creating effects that include spot shots such as Big Muff, Memory Man and not least the POG series. Famous for its curiosity and ability to innovate, Electro-Harmonix is today firmly placed on millions of pedalboards worldwide.

The electro-harmonix Big Muff Pi Nano distortion/fuzz pedal serves up a wide range of aggressive tones that have been favored by Jimi Hendrix, Santana, Pink Floyd, and countless others. The tone control covers expansive sonic territory, while the sustain control lets you dial in just how huge your sound is. The Big Muff Pi is one of the most popular distortion/fuzz boxes at Sweetwater for electric guitar or bass, and now you can have it in a more convenient smaller size with the ehx Big Muff Pi Nano!

Be the first to write your review!

30 other products in the same category: